Let's see if this works! Please click on the picture below, and start those comments rolling in. What should we do to improve this graph, and what does it mean?

Note: the haplogroup assignments are by FT DNA and include their predictions. 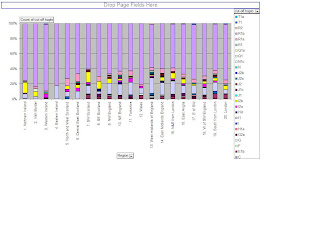 The data here is just our project data, but:-

And here is the data:-

And here are the regions I have used, in order to get big enough data sets, of people with pedigrees back to old counties:-

Here are a few first remarks:-
But I have to say that I haplogroup prediction from FT DNA and also from Whit's predictor can probably be improved upon. I have contacted the obvious people: Jim Cullen and Ken Nordtvedt. I haplogroups perhaps deserve their own post in the near future.
Posted by Andrew Lancaster at 4:10 PM